Please feel free to visit the hall and view some of our history!

History of Wales Schools and Churches

Ten schools previously existed in Wales Township (Kindergarten through 8th grade). They were: Kendall, Danard, Lamb, Persel, Goodells, Wales Center, Castor, Mudge, Beech, and School in the Woods. Presently there are no schools within the township. 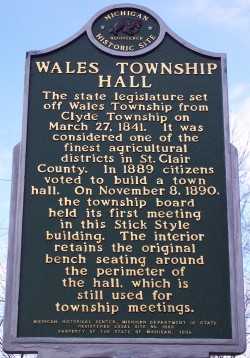 1830 – Records show that most of the early settlers of Wales Township came from New York, Pennsylvania, and Canada.

1843 – Township auctioned off jobs, at “publick auction”. The job paid 10 1/2 to 18 cents per rod. The jobs auctioned off were “to make the road as level as possible between the center and the right….stumps standing on high ground to be grubbed so as to make it level with the surface.”

1846 – On April 15, 1846, a main road was established from Almont to Port Huron. Joshua Tompkins, Daniel B. Harrington, and James Andrews were appointed as Commissioners. Part of this road was the main road going through the center of Wales Township and was built over an old Indian Trail. The route was over the Wales Ridge, Lamb (formally Tompkins Road), and Emerson (formally the Black River Road), Sparling and Pine Woods (also known as Black Woods Road), road to Wadhams. The route was the highest terrain in Wales Township. A stage line from Flint to Port Huron was later routed over these same roads with a stop-over at John Persels’ place (formally Joshua Tompkin’s) in Lamb, known as the White Sock Inn. John Persels kept horses with white markings as socks and that is how the Inn got it’s name. It was one of the most elaborate places around with a ballroom and running water.

1851 – Township of Wales receives it’s first post office. “Benton Barlett, saloon and hotel owner, was it’s first PostMaster. The Post Office was located on the line fence behind Tony Konyha’s place. A road running between Tony Konyha’s and Robert Fiser’s gave access to the post office, according to the 1876 map of Wales Township. The location changed about 1883 or shortly thereafter because the Northwestern Railroad came through the township at that time.”

1866 – Village of Goodells established. It was named after John Goodell, who lived in the house where L.G. Webb lived in before WWII.

1870 – Post Office established November 7, 1870, located on west side of Wales Center Road (halfway between the railroad and Lapeer Rd.)

1876 – Post Office moved to the village proper of Goodells. The village, at this time, was a lumbering town with a steam sawmill, located west of Dr. McCue’s house on the north side of the railroad. There was also a gristmill located in the “Shady Nook” area. In addition to the gristmill, John Goodell also owned a cheese factory and a store. The township continued to grow in the following years. It had a blacksmith shop, hotel, two general stores, two hay sheds, two coal yards, a foundry and machine shop, woodworking shop, cider mill, railroad depot, freight shed, grain elevator, post office, hardware store, bank, garage, milk station, pickle factory, Macabee Hall, doctor, and two churches: Methodist and Baptist.

1876 – Grange Lodge, No 45, of the Patrons of Husbandry of South Wales, was established. The installation of officers took place January 15, 1876 at the Wales Schoolhouse. The Acting Master, Joshua Tompkins, was the installing officer.

1880 – East Wales Cemetery was renamed Mt. Pleasant Cemetery when the church there was built.

1883 – The third trading center in Wales was Lamb Corners. In 1883, the Port Huron and Northwestern Railroad went through the central part of Wales Township with it’s mail run from Port Huron to Almont of Lapeer County. The town of Lamb Corners formed around the Lumber Mill and Flour Mill operated by John A. Lamb, and the town was named for him. Byron Jenne was it’s first post-master and the office continued until April 30, 1942.

1883 – East Wales Cemetery was renamed Lamb Cemetery after the establishment of the Village of Lamb.

1889 – Annual Meeting for Wales Township. $500 is allocated towards the building costs of hall.

1897 – Map shows the new location of the Post Office to be in the area of Wales Center and Lamb Road.

1947 – Wales Township Board approves the motion to refuse any and all liquor licenses for the Village of Goodells.

1989 – Hall moved 120 feet east to it’s present location. Woodwork, hardwood floor, lettering on the outside of the builidng, portico, shutters and siding are all original. Total cost $40,000, for moving the hall and adding the basement.

2000 – September 17, 2000 – Wales Township Hall was declared and dedicated with Historical Marker Status (see picture at the bottom of the page).

2015 – November 11, 2015 the Wales Historical Society put on a celebration for the 125 Year Birthday of the Wales Township Hall.